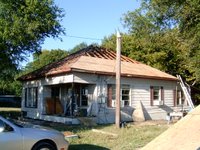 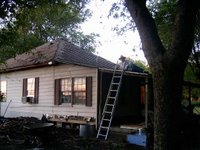 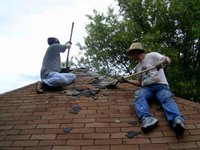 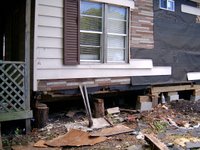 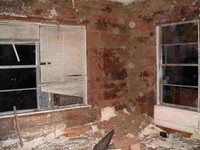 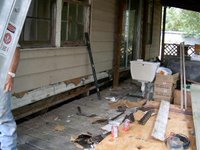 OK. So the first thing that had to be done was to gut the entire building. This took some time. We got a name from the previous owner of the place–a Mr. Glen Stewart–who might help us fix the pier and beam foundation. Glen, by the work of Providence, stayed on and helped us rebuild the whole house. He brought several helpers, most notably, Mr. Dan Breach, who was also instrumental in seeing that every job was accomplished. A friend of Ted’s, Larry from Oklahoma, helped us with some framing and the roofing. Ted did all the electrical wiring, and Glen and Dan did the rest. They did let us help bash out sheetrock. They battled hot weather and cold, snakes under the floor, chiggers and metallic paint, plans that had to be “verified in the field,” and all I had to do was pay them cash and keep the coffee coming. What a deal.

As you can see, it had to get pretty ugly before it got better.

Come for a visit, and touch the farm.

You've found your sanctuary. Jacob’s Reward Farm, just minutes from Dallas, Plano, and Allen, Texas, provides a rest from the hectic pace of corporate and suburban life. Visit for a while and set your worries aside. Enjoy the fresh air, the open space, and the gentle creatures of the farm, and a community of friends who love what you love.

If you spin, knit, crochet or weave, or would like to, we offer not only quality wool and alpaca fiber, but a meaningful relationship with the people and animals who bring it to you. Through our fiber CSA and our pasture-fresh eggs, you can enjoy healthy farm life, even if you live in the city.